On 26 -29 June we were pleased to attend a symposium on the campus of Loyola University in Chicago (USA).  The symposium was organized by the Carmelite Institute of North America and entitled “Pope Francis points the way for Carmel” which dealt with the inspiration for Carmelites in the messages of Pope Francis.

Participants at the symposium included the Prior General, Fernando Millán Romeral, O.Carm., the provincials of the Chicago province, Fr. William Harry, O.Carm., (who reported on the activities of the Carmelite Institute) and of the North American Province of St. Elias, Fr. Michael Kissane, O.Carm. along with many Carmelite friars, Carmelite sisters, lay Carmelites from many different groups and other members of the Carmelite family. Cardinal Blase Joseph Cupich of Chicago presided over the opening mass.  The symposium was well represented by over 110 attendees.

The second day began with an opening Mass Celebration with Archbishop of Chicago, Cardinal Blasé Cupich as celebrant. Cardinal Cupich referred to John of the Cross in living the Carmelite way. He suggested modelling our life on Christ, giving thanks to God, choosing the difficult path – an attitude of always being open to God’s way and developing an attitude of openness and freedom.

The speakers for day two included:

Thoughts that struck us from these speakers

Pope Francis encourages a down to earth comfort with a ‘church on the streets’ in which we should be addressing the scandal of poverty. Are we uncomfortable enough to be truly prophetic in what we do and provide witness for the future in a spirit of hope?

Pope Francis is more of a spiritual theologian giving messages about doing the faith rather than understanding faith. We need to make the kingdom of God a reality in this world and ‘smell like sheep’ Go to the margins – to those without voice, power, dignity or hope.

Much of our western theology is privatized, spiritualized and eschatological. The WE is lacking. In the bible, we have a covenanted community.

Also, an overly spiritualized tradition can neglect the body and along with this – creation and history. Interesting how religious were thought to ‘leave the world’ – as though the world is bad!

Traditional theology has had over emphasis on the end (eschatology) rather than now.

Have we made a mess yet? If not, are we up to the challenge?

Let’s not forget to capture spirituality through poetry and the arts.

Donna Orsuto spoke about St Elizabeth of the Trinity speaking to the laity, her main message being to become the house of God amid the people. Elizabeth in Hebrew means house of God. As well Pope Francis reminds us that Jesus didn’t tell the disciples to form an ‘elite’ group but rather to go out and make disciples of all people – especially those on the fringes.

Living in a culture of comfort makes us live in soap bubbles and the danger of a globalization of indifference. Do not ‘cage in’ the spirit but open the cage!

Do we have a simplicity of life to make space for others in the same way Elizabeth did especially in relation to her sister (see letters) And in encouraging us to share with others, be connected to creation, family, country and making Carmel our homeland, Donna quoted the Australia Poet James McAuley:

Incarnate Word,
in whom all nature lives,
Cast flame upon the earth:
raise up contemplatives
Among us, men who
walk within the fire
of ceaseless prayer
impetuous desire.
Set pools of silence
In this thirsty land 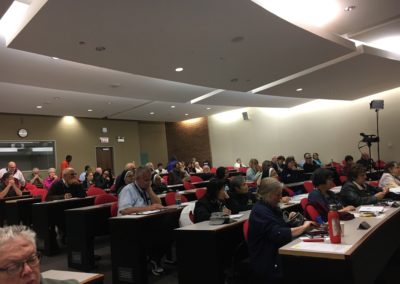