From Damien Peile:
In the August news, I mentioned the Carmelite Explorers Spirituality group from Ireland that holds regular meetings and sought endorsement from the Irish Province.  Since then I’ve contacted the group’s convenor and founding member Dr Mary Forrest who is a Lecturer at University College, Dublin and I look forward to keeping in touch with Mary and the ‘Explorers’ regarding the progress of their meetings. 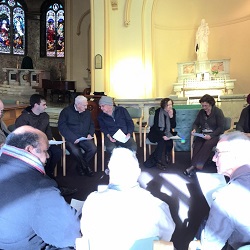 The Lectio Divina Group regularly has 10-15 participants including Carmelites David Hofman, Matthew McPhee and Paul Sireh.  Clearly the time to reflect and pray the Scriptures is a core aspect of Carmelite spirituality.  Each week we focus on the Gospel for the following Sunday using the usual Lectio Divina structure of gathering quietly, reading the Scripture, listening to a short commentary on the Gospel, silent time and then sharing reflections arising from the text.  Afters the hour of prayer several members of the group gather in the Library for a ‘cuppa’ and further conversation.

The Carmelite Learning Circle has grown out of the Lectio Divina group and is the initiative of two people who wanted to follow through on topics raised from discussions on Friday mornings.  Topics to date have been compassion, forgiveness, suffering, prayer and coming in October is sin. The group leaders are assisted by David Hofman. The goal of the meeting is to help those present reflect on aspects of the Carmelite tradition today.

Carmelite Librarian Suggested Reading – Philip Harvey, Carmelite Librarian
One of the best collections of Carmelite reflections and prayers in English is ‘Meeting God’. First produced by the Irish Province in 2007, the book went into a second revised edition in 2014 under the aegis of the Carmelite General Curia in Rome. This is its own recommendation, and rightly so. You’ll find it in the Carmelite Library for free, or you can buy it online after googling the ISBN: 978-1-78218-142-2

‘Meeting God’ serves as a succinct introduction to the charism of the Carmelites, their history and practices. But more usefully, the book contains prayers, quotations, and other writings that you may return to at any time. These words are taken from greater and lesser known Carmelite spiritual writers, from sections of the Carmelite Liturgy, statements of the Prior General, and other heritage documents. The text of the Rule is set out clearly and attractively, with an excellent parallel commentary that provides context and purpose. The book is a handy way into the richness of Carmelite tradition.

Monthly Musing
This week I was struck by a brief conversation with someone who attended Lectio Divina for the second time. She commented on the power of meeting with others to pray and how much this meant to her. ‘It’s so much harder to do this on your own – this is really powerful’ she said.  I am always struck by the encouragement we give to each other in such groups by affirming our similar struggles, questions and commitment. I always leave the group feeling more renewed in my relationship with Christ – even if I keep falling into the same old patterns and again look for the next opportunity for community support.